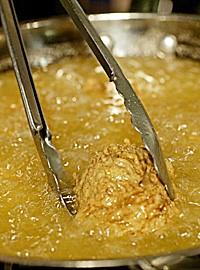 When it comes to knowing which vegetable oil is best and safest to cook with, many restaurants and so-called health experts don't seem to understand basic biochemistry. That's because even the "safe" vegetable oils used by restaurants and recommended by experts convert to seriously damaged breakdown products that have been linked to heart disease and neurological disorders.

These include the fatty acid-derived toxin 4-hydroxy-trans-2-nonenal (HNE). According to researchers, HNE collects in high amounts in polyunsaturated oils that have linoleic acid, which include:

HNE's Effect on the Body

Researchers explain that HNE's toxicity stems from the fact that it reacts extremely energetically with biomolecules once it is absorbed into the body by way of food. Also, it reacts with the various kinds of amino groups--proteins, DNA, RNA--affecting basic cellular processes.

Based on these findings, a spokeswoman for the American Dietetic Association recommended that if a person is worried about the health aspects of HNE, they should refrain from heating any oil to the point of smoking and should never reuse the same oil when cooking at home.

One of the most important recommendations, however, would be to avoid eating fried foods at restaurants, as there are no industry-wide rules that govern the choice and maintenance of cooking oils used in restaurants.